Don't Be That GuyFor Job Seekers - Finding a Job

“The world has moved on.” – Stephen King, The Dark Tower series

“Either way, I don’t give a damn what you think you’re entitled to.” – Colonel Nathan Jessep in “A Few Good Men”

There are idiots walking among us, and they’re making it harder for some of you to find a job.

Therefore, it’s time to talk about them – the job seekers out there with unrealistic expectations and an overblown sense of entitlement.

Let me start by stating a few painful truths for these folks: 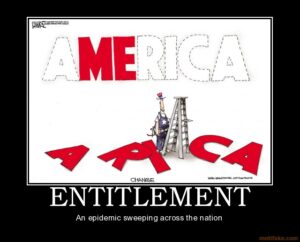 It’s 2011 folks…and in case you haven’t noticed, the economy out here in the metro Detroit area is in rough shape.  It may not be as bad as the national media wants to portray it, and it may even be showing signs of improving…but it still falls into the realm labeled “It Sucks”.  For every posting that a recruiter puts out for a job, they’re getting hundreds if not thousands of resumes.  There are people getting walked out, fired, laid off, “separated”, rif’d – call it whatever you want – every day.  Employers are trying to squeeze every penny of productivity that they can out of what they have…and that means people, too.  Being pressed into service doing more than their own job, taking on additional responsibilities (whether they’re fully qualified for them or not), and generally feeling the heat and pressure to over-deliver no matter what the cost.

So, with that in mind, I really want someone to explain to me why I hear from recruiters things like:

Don’t Be That Guy: The Recruiter Strikes Back (http://www.ITinTheD.com/73/the-recruiter-strikes-back/) has been live for a long time.  It’s not like any of this is breaking news, or should come as any sort of surprise to people.  And yet I still recently caught a bunch of flak about a job posting that I put in the group a couple of weeks back because it was for a company that was looking to hire a bunch of entry level phone-based helpdesk jockeys, and they were looking to pay less than $10 an hour.

Now, I understand that’s not a great pay rate.  I do.  But let’s be realistic – those gigs aren’t really being marketed to people that have been in the industry for 20 years.  They’re designed for kids either still in school or fresh out of school, or possibly for someone that’s just looking to transition into the IT industry and looking for their first gig.  It’s a resume builder.  It’s a position that finally allows you to say “I’m in IT” rather than “Uhhh…yeah, I don’t have a resume” or “Uhhh…yeah, ignore my resume, I’m trying to GET into the IT industry”.  Sometimes you take a gig just to get your feet wet and get some experience under your belt.  I assure you that it wasn’t my lifelong dream for my first job to basically be a data entry monkey.  But I took it.

And I used what I learned to roll into my next job.  Which was slightly better for me career-wise and paid a little better.

And I used what I learned to roll into my next job.  Which was slightly better for me career-wise and paid a little better.

Which is pretty much the way it’s supposed to work.  Bob didn’t wake up one morning in his early 20’s and have someone drop a nice paying, heavy responsibility sales job in his lap.  Not that this will really shock anyone or anything, but Bob sold beer (see?  “Circle of life”.  Hakuna matata.  It all makes sense now, doesn’t it?), and then Bob broke into technology and starting selling connectivity  (insert snide remark here) and colocated server space.  And then Bob started selling hardware.  And then Bob got some decent attention for his numbers and performance and kept moving up the food chain.

“Moving up the food chain” is really the key idea here – you’re going to have to do it.  We all had to do it, and that’s just the way it works in life.  You have to put in your time, and you have to prove yourself in order to get more responsibility, better pay, and cooler positions.

So please…leave the sense of entitlement behind.  It’s not doing you any good, and it’s starting to seriously torque off recruiters…which doesn’t do anyone any good, because I certainly wouldn’t want to be the poor bastard that calls them right after they get off the phone with you.

That’s all for this time.  Make sure you check out all of our other Don’t Be That Guy entries at http://www.ITinTheD.com/category/dbtg/

Because I’ve been told that I should specifically call out some of our older entries that are on-topic and have some decent value to them, for additional reading on the subject, I’d recommend:

Don’t Be That Guy – The Recliner Principle: http://www.ITinTheD.com/22/the-recliner-principle/

Don’t Be That Guy -Lessons from a Child’s Toy: http://www.ITinTheD.com/30/lessons-from-a-childs-toy/

Don’t Be That Guy -The Ten Commandments of Networking: http://www.ITinTheD.com/68/the-ten-commandments-of-networking/

Don’t Be That Guy -The Lazy Job Seeker: http://www.ITinTheD.com/201/the-lazy-job-seeker/

Don’t Be That Guy -I Can’t Make It To The Event, But Can You Forward My Resume Guy: http://www.ITinTheD.com/797/i-cant-make-it-to-the-event-but-can-you-please-forward-my-resume-guy/